Rufaida Al-Aslamia RA is depicted as a kind, empathetic nurse and a good organizer. With her clinical skills, she trained other women. Including the famous female companions of Rasulullah ﷺ - Saidatuna Khadijah RA, Saidatuna Aisyah RA, to be nurses and to work in the area of health care. Rufaida Al-Aslamia RA also worked as a social worker, helping to solve social problems associated with the disease. In addition, she helped children in need and took care of orphans, handicapped and the poor. 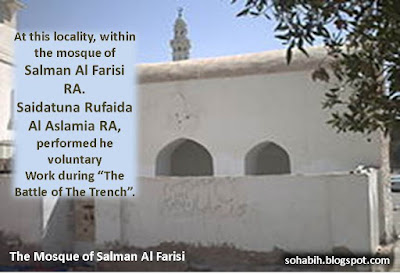 Rufaida Al-Aslamia RA were born into a family with strong ties to the medical community, Rufaida Al-Aslamia RA's father, Sa`ad Al Aslamy RA, was a physician and mentor under whom Rufaida Aslamia RA initially obtained clinical experience. Devoting herself to nursing and taking care of sick people, Rufaida Al-Aslamia RA became an expert healer. Although not given responsibilities held solely by men such as surgeries and amputations, Rufaida Al-Aslamia RA practiced her skills in field hospitals in her tent during many battles as Rasulullah ﷺ used to order all casualties to be carried to her tent so that she might treat them with medical expertise. It has also been documented that Rufaida Al-Aslamia RA provided care to injured soldiers during the jihad (holy wars), as well as providing shelter from the wind and heat of the harsh desert for the dying. 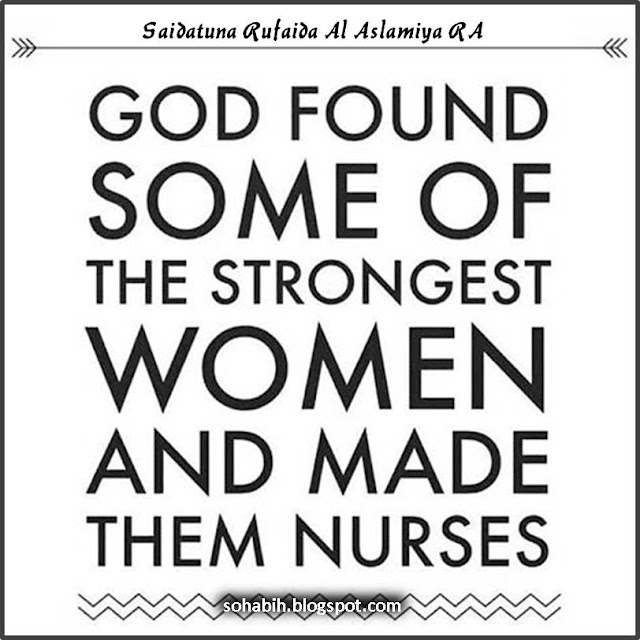 Pre-Islamic and Islamic Era (570–632 AD)
Typically presented within the context of Rasulullah ﷺ, the historical development of female nursing and surgery in Arabia from the Islamic Period to the modern times boats a tumultuous history laden with cultural barriers and public pressure. Though very sparse documentation exists pertaining to the history of nursing in the Pre-Islamic period, a proper understanding of societal and religious paradigms during the reign of Rasulullah ﷺ lends significant insight into the roles and expectation of nurses in antiquity. In marked contrast to the pervading Christian interpretation of disease as a divine punishment for man, Muslims place an extremely high value on the ritual cleansing of the body, daily prayer schedules, and strict dietary regiments. An era in history defined by a number of holy wars, medicinal treatment during the times of Rasulullah ﷺ was largely performed solely by doctors, who would personally visit the patient to diagnose abnormalities and provide medications to those who were in need. Placing the bulk of the biological and physiological responsibilities of a patient on the doctor alone, nurses were limited in their duties to providing physical comfort and emotional support.

Front door of ancient hospital of Salé in Morocco designed by Islamic architects and managed by ancient Islamic physicians. 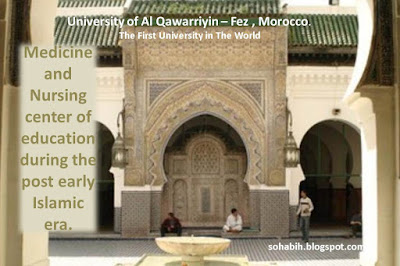 Post-Prophetic to Middle Ages Era (632–1500 AD)
With the diminishing intensity of holy wars and mass civil unrest that defined the climate of Islamic culture during the reign of Rasulullah ﷺ, advancements in technology and architecture resulted in the construction of many new hospitals and methods for treating the sick. Though nurses in this period of time were still relegated to rudimentary and noninvasive duties like serving food to patients and administering medicinal liquids, religious and social norms of the times necessitated the segregation of hospital wards based on gender, with males treating males and females treating females.While there has been some relaxation of segregation in contemporary times, the values of many traditional Islamic people are for hospitals and their policies to reflect these past segregation practice.

Revolutions In Nursing Development.
Rufaida Al-Aslamia's - Emergence as Nursing Leader.
Though still highly limited in the invasiveness of their work, a shift in widely accepted cultural expectoration's regarding a woman's role in the hospital provided many the opportunity to emerge as leaders in a field previously dominated solely by men. A charismatic and capable leader, published records testify that Rufaida Al-Aslamia RA, who practiced at the time Muhammad, was the first Muslim nurse.]While there is slight controversy in who is "technically" the first surgeon and nurse in history, Middle Eastern countries attribute the status of the first ever nurse to Rufaida, a Muslim surgeon and nurse.

Her father was a physician by trade, and taught his daughter the skills needed to care for the sick and wounded. At a time in history defined by a number of holy wars, Saidatuna Rufaida Al-Aslamia RA’s help was invaluable on the battlefield, and she cut her teeth in desert field hospitals.

Saidatuna Rufaida Al-Aslamia RA’s was also an excellent organizer and clearly a charismatic personality – in the highly male dominated field of medicine she was able to flourish and thrive. She trained other women in nursing, and introduced the first documented mobile care units which aimed to stabilize the wounded after battles and prepare them for further procedures.

In addition to her role in battlefield healthcare, Saidatuna Rufaida Al-Aslamia RA’s was interested in disease and its causes among ordinary people. She is recorded as having personally worked in poor communities encouraging hygiene and attempting to alleviate social problems which led to poor health.

In Islam, nurses provide healthcare services to patients, families and communities as a manifestation of love for Allah and Rasulullah ﷺ. The nursing profession is not new to Islam. Islamic traditions include sympathy for and responsibility toward those in need. This perspective had emerged during the development of Islam as a religion, culture, and civilization.

1      Ethos of health care service
2      Approach to health care service
3      First Muslim nurse
4      Nursing in hospitals
5      References
In Islamic traditions, caring is the manifestation of love for Allah and Rasulullah ﷺ. Caring in Islam, however, is more than the act of empathy; instead, it consists of being responsible for, sensitive to, and concerned with those in need, namely the weak, the suffering and the outcasts of society. This act of caring is further divided into three principles: intention, thought, and action. Intention and thought refer to who, what, where, when and why to care, whereas action is related to the knowledge necessary to be able to care. In short, health care is deemed as service to the patients and to Allah, as opposed to other professions that are commercial-based. This ethos was the fundamental motivating factor for the majority of the doctors and nurses in the history of Islam.

Approach to health care services in Islam
Another aspect of Islamic health care service that distinguishes it from the contemporary Western health care industry is the holistic approach to health and wellbeing taken. This holistic approach consists of both treating the organic basis of the ailments and providing spiritual support for the patient. This spiritual component comes in the form of Tawheed (Oneness of Allah), a dimension lacking in current Western models of nursing and, thus, could pose as a challenge for application of this model of nursing to Muslim patients as it does not meet their holistic needs.
Nursing in hospitals of the Medieval Muslim Society
In hospitals built in the Medieval Muslim society male nurses tended to male patients and female nurses to female patients.[4] The hospital in Al-Qayrawan (Kairouan in English) was especially unique among Muslim hospitals for several reasons. Built in 830 by the order of the Prince Ziyadat Allah I of Ifriqiya (817–838), the Al-Dimnah Hospital, constructed in the Dimnah region close to the great mosque of Al Qayrawan, was quite ahead of its time. It had the innovation of having a waiting area for visitors, not to mention that the first official female nurses were hired from Sudan to work in this hospital. Moreover, aside from regular physicians working there, a group of religious imams who also practiced medicine, called Fugaha al-Badan, provided service as well, likely by tending the patients’ spiritual needs.
Know more about the heritage in science and health technology in Islam related to Al Qayrawan  Al Dimnah in nowadays Tunisia. here