Adi bin Hatim RA – Finally he didn’t left for Caesar.
Rasulullah SAW Invites Adi bin Hatim to Islam. Adi bin Hatim. Narrates, 'O Men I heard about the coming of Rasulullah SAW, I disliked this very greatly. So I left and found myself close to Rome (according to another narration he said, "So I left and went to the Caesar").
Calling to Allah was the mission of all Rasul of Allah and Nabi of Allah beginning with Adam until the Last Muhammad Rasulullah SAW and his followers, as Almighty Allah says in the Qur’an:
Say (O Muhammad), “This is my way; I invite to Allah with insight, I and those who follow me. And exalted is Allah; and I am not of those who associate others with Him.” (Al-An`am 6:108)
Their mission was to bring people out of the darkness of disbelief into the light of Islam, from worshiping idols to the worship of Allah, and from the Hellfire to Paradise. The Prophet (peace be upon him) used to call people with wisdom and beautiful preaching based on the Qur’anic guidance as Almighty Allah says:
“Invite to the way of your Lord with wisdom and good instruction,
and argue with them in a way that is best…” (An-Nahl 16:125)
In the following, we will discuss in brief the story of the conversion of `Adi ibn Hatim At-Ta’i who was one of the greatest figures of Christianity during the period that preceded Islam:
`Adi was the son of Hatim, the chieftain of Tai’ tribe, which lived in Najd Province in the central part of Arabian Peninsula. After the death of Hatim, his son `Adi was crowned as the ruler. When Rasulullah SAW started calling people to Islam, `Adi felt threat to his rule. Therefore, he began to oppose Muhammad and act against the interests of Islam. `Adi and his tribe were Christians. When Islamic conquests came near to his tribe’s boundaries, `Adi decided to flee to Syria that was under a Christian King. Due to his haste in leaving his people, he could not take his beloved sister along with his caravan proceeding to Syria.
It was narrated that, when `Adi knew about Rasulullah SAW  mission, he moved to Syria. His sister and a group of his tribe were taken as prisoners. Later, Rasulullah SAW) released her and she returned to her brother (`Adi) asking him about converting to Islam. `Adi came at the head of a group of his tribe to meet Rasulullah SAW  in Madinah. `Adi’s father was known for his generosity, so the people of Madinah were pleased with his coming to Rasulullah SAW. `Adi came to Rasulullah SAW with a cross of silver around his neck while Rasulullah SAW was reciting:

“They have taken their scholars and monks as lords besides Allah… “(At-Tawbah 9:31) 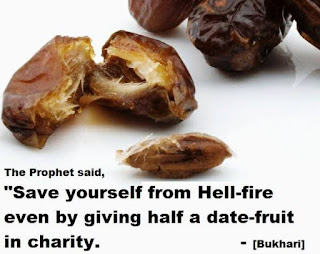 Rasulullah SAW then added, "Listen. I am also well aware of the thing that prevents you from accepting Islam. You say that only simple people who have no influence follow him; people whom the Arabs have cast out. Do you know the place Heera?" Adi bin Hatim replied, “Although I have never seen the place. I have certainly heard about it." Rasulullah SAW then said, "I swear by the Being who controls my life! Allah shall bring this (propagation of Islam) to such completion (and the land will be so safe) that a veiled woman shall leave from Heera all alone and perform Tawaf of the Ka’abah without the need of having someone accompany her. Without doubt, the treasures of Kisra bin Hurmuz shall also be conquered.
"In astonishment, Adi bin Hatim said, "The treasures of Kisra bin Hurmuz?" 'Yes," replied Rasulullah SAW, "The treasures of Kisra bin Hurmuz. In addition to this, wealth will be so freely spent that there will be none to take it."
After narrating the story, Adi bin Hatim said, "There is the woman from Heera performing Tawaf without anyone to accompany her and I was among those who conquered the treasures of Kisra. I swear by the Being in whose control is my life, the third prophesy shall also come true because Rasulullah SAW said it.''

Adi bin Hatim RA - narrates that he and some others were at a place called Aqrab when a group of horsemen sent by Rasulullah SAW arrived there. They captured some people along with  Adi bin Hatim’s aunt. When they were brought before Rasulullah SAW and lined up before him, his aunt said, "0 Rasulullah SAW! My breadwinner has gone missing, my children are no more and I am just an old woman who cannot be of any service. Be kind to me and Allah will be kind to you." ''Who is your breadwinner?" Rasulullah SAW  asked.
"Adi bin Haatim" was the reply. Rasulullah SAW  said, "The one who escaped from Allah and his Rasul.

Rasulullah SAW showed kindness to her (by letting her go) and as she-left, a man who had been with Rasulullah SAW (whom they believe was Saidina Ali RA, it will not harm me in the least. On the other hand, if he is speaking the truth) said to her, "Why do you not ask Rasulullah SAW for transport?" When she asked for transport, Rasulullah SAW ordered and had it arranged for her.  Adi bin Hatim RA  continues the story. He says, "When my aunt came back, she said to me, 'your father would have never done what you did (deserting me like that).' Whether you like it or not, you will have to go to him (Rasulullah SAW).'

What made you run away? Did the thought of saying Allah is the greatest make you run away? Is there anything greater than Allah the Most High the Most Exalted?' I then accepted Islam and I saw the face of Rasulullah SAW light up with happiness and he said, 'Indeed those with whom Allah is angry are the Jews and those who are astray are the Christians.'"(At-Tirmidhi and Ahmad) 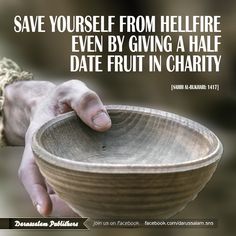 Adi bin Hatim RA - continues, "Some people then began asking Rasulullah SAW for things (and because he had nothing with him, Rasulullah SAW started encouraging the Sahabah RA to assist these people). Rasulullah SAW then praised Allah SWT and said to the people, '0 people! Spend from that wealth which is extra even though it may be one Saa or even less than that; whether it may be a handful or even less than that (one of the narrators by the name of Shu'ba says that as far as he can remember, Rasulullah SAW also added, 'Whether it may be a single date or even a piece of a date). Every one of you shall stand before Allah (on the Day of Qiyamah) and Allah SWT shall ask him exactly as I am telling you now. Allah SWT shall say, 'Did I not bless you with the faculties of hearing and seeing? Did I not give you wealth and children? What have you sent ahead from this?

A person will then look in front of him and look behind him. He will look to his right and look to his left but he will find nothing there. He shall have nothing to save him from the fire of Jahannam besides the countenance of Allah SWT. Therefore, save yourselves from the fire of Jahannam even though it is with a piece of the date (that you give as charity). If you do not even have that, than, do so by speaking a kind word (to a beggar). Verily I do not fear poverty overcoming you for Allah shall certainly assist you and shall certainly bestow his bounties upon you (according to another narration he said, "Allah shall certainly grant you many conquests") until the time comes when a veiled woman shall travel between Heera and Madinah or even a greater distance without the fear of being robbed while sitting in her carriage.

On another perspective of Adi bin Hatim RA:
Adi bin Hatim ( عدي ابن حاتم الطائي ) was a leader of the Arab tribe of Tayy, and one of the companions of Muhammad. He is the son of the poet Hatim al-Tai,who was widely known for his chivalry and generosity among Arabs. Adi remained antagonistic to Islam for about twenty years until he converted to Islam from Christianity in 630 (9th year of Hijra).

Adi bin Hatim inherited the domain of his father and was confirmed in the position by the Tayy people. A great part of his strength lay in the fact that a quarter of any amount they gained as booty from raiding expeditions had to be given to him.

Adi joined the Islamic army at the time of Caliphate  Abu Bakr. He fought wars of revolt against the apostates and also was a commander of the Islamic army sent to invade Iraq under the command of Khalid ibn al-Walid. He also fought on the side of the final Rightly Guided Caliph, Saidina Ali ibn Abi Talib RA, at the Battle of Camel an
d Battle of Siffin.

(1) Ahmad as quoted in Al Bidaaya wan Nihaaya (Vol. 5 Pg. 66). Baghawi has also narrated the report
as mentioned in lsaaba (Vol. 2 Pg. 468).
(2) Referring to the closing verse of Surah Faatiha.
(3) Ahmad. Tirmidhi has also narrated the Hadith and classified it as "Hasan, Ghareebnwithout
knowing whether it is narrated by anyone besides Sammaak. Bayhaqi has narrated a part of the